Archives can be rich sources of information, inspiration and practical advice for artists, film‐makers and others. Within unassuming boxes, cabinets and other storage areas can be found a treasure trove of documents, artefacts, artworks and audiovisual material. 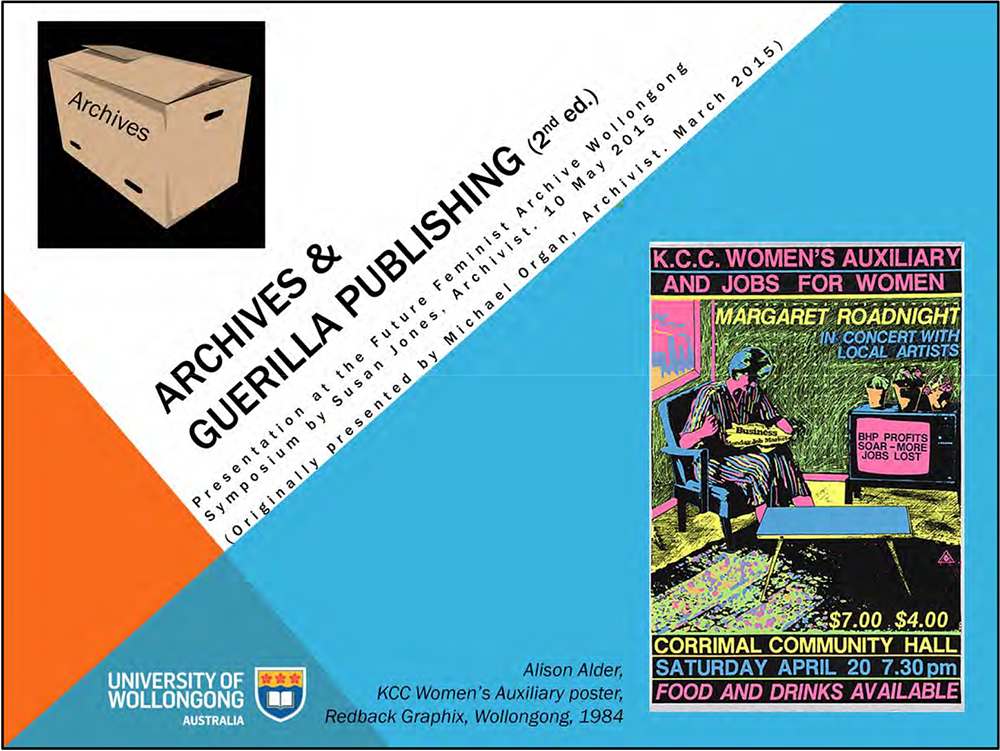 Photographs, film, drawings, prints, letters, manuscripts, publications as well as other more ephemeral material such as pamphlets and posters. Just one single item may help spark that idea or make that connection or reveal useful clues (such as the various references included in this striking poster by Alison Alder relating to the local 1980s Jobs for Women campaign). Sometimes even the way material has been physically organised or preserved can speak volumes about it’s creator, which is why archivists harp on so much about original arrangement (and things like provenance and referencing – hence the edition note in my presentation title today!)

Today I’d like to show two examples of the richness of archives available for feminist research, drawing on material held in collections at the University of Wollongong.

And for those unsure – as I was myself when I first heard the term not so very long ago ‐‘guerilla publishing’ (also sometimes spelt ‘guerrilla’) in this sense can refer to using less mainstream methods to achieve greater exposure for relatively small outlay or be able to make published outputs available in a much quicker timeframe than say the traditional scholarly publishing route often takes. Similarly ‘guerilla archiving’ could describe a range of strategies archives might use beyond their traditional collection listing methods to help increase discoverability of specific archival collections, such as creating portals and blogs.

Example 1: The UOW Archives, based within the University Library, holds 7 boxes of records of an organisation called NOW. New Opportunities for Women was a Wollongong‐based support group for women dealing with employment, childcare and discrimination. 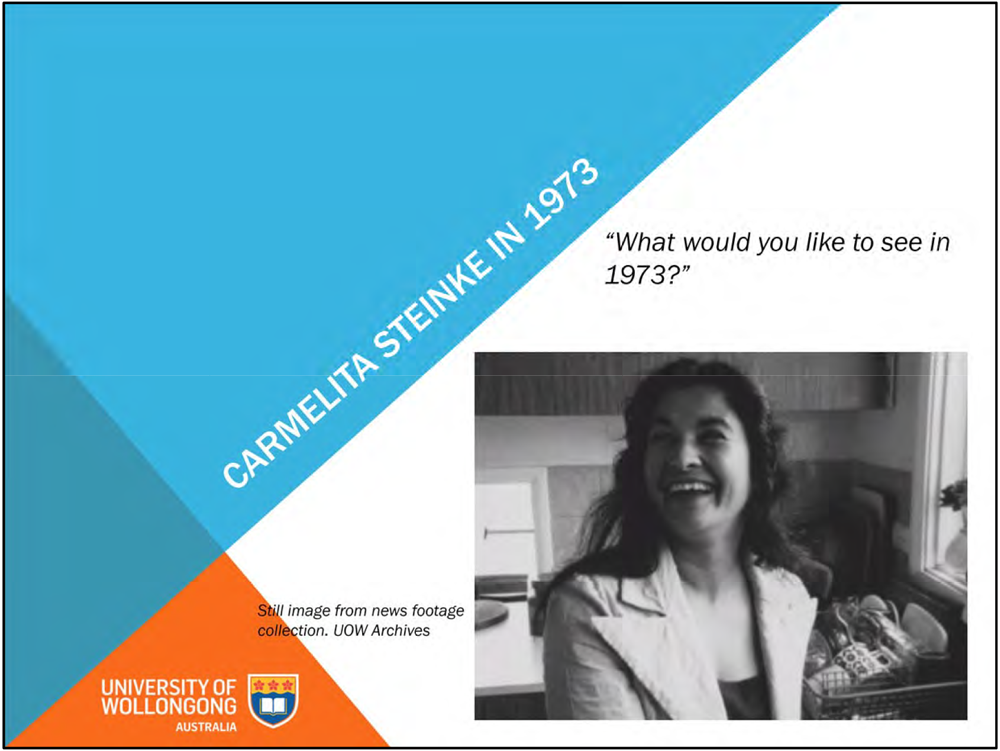 NOW was set up in 1965 by Carmelita Steinke, a prominent media professional and campaigner for women’s rights who became well known in the Illawarra over the following decades. Her husband John Steinke was equally well known, being the first head of Economics at our University and instrumental in local regional development research, including a major report on female unemployment in the early 1970s.

Amongst her many roles and interests she worked as a media officer for the regional Department of Social Services (aka Social Security), was later a director and broadcaster for local community radio station VOX FM and had also been active in the anti‐Vietnam War movement. Mrs Steinke died in 2007.

Open one of these 7 boxes and you find prospective employee information cards, deidentified of personal names and specific addresses, but clearly outlining the qualifications, skills, talents as well as a note on general physical appearance of individual local women – many of them migrant women – seeking employment at that time. These evoke a unique snapshot of the employment scene at that time.

The Archives also holds a range of local television news and other film footage, and in amongst this we discovered a brief vox‐pop from the beginning of 1973 with Carmelita Steinke herself so we could hear Carmelita in her own words.

Wollongong region was still denied all the benefits of having a cultural centre, performing arts theatre or regional art gallery.

Example 2: A more recent collection we hold in our Archives is material from Mary Callaghan – artist, print maker, filmmaker and writer. Mary worked in Melbourne and Sydney during the 1970s.

Many different collecting institutions around the country hold copies of Mary’s works, among them our University of Wollongong Art Collection (this is separate to the University Archives) and of course also the Wollongong Art Gallery. 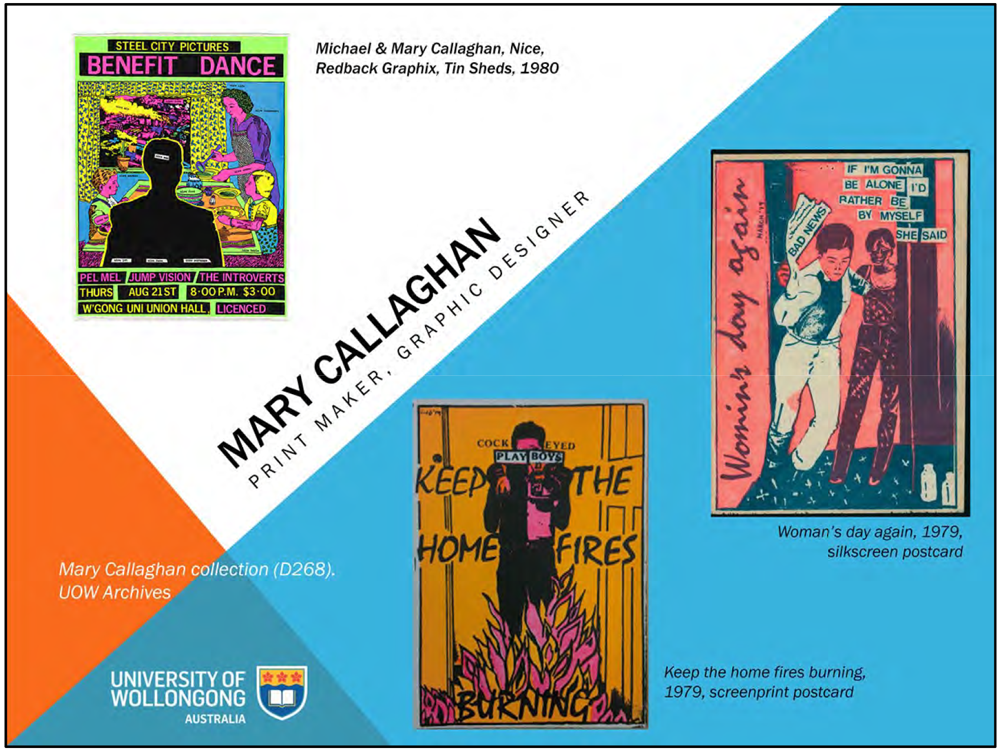 A big challenge for researchers can be discovering what range of archival material exists hidden away, who may hold what where and how to go about organising access.

Archivists play a key role in using the knowledge and resources they build up over time to help connect people with not just their collections but also those held elsewhere. For example my colleague Michael Organ has compiled a useful online blog with listings and more general information on ‘Mary Callaghan Posters’:

In 1979 Mary returned to Wollongong to work on her semi‐documentary film ‘Greetings from Wollongong’, being a day in the life of two local young women. Prior to this she had done a number of experimental films and performance pieces and later went on to direct the Australian feature film Tender Hooks, released in 1989.

Another useful blog Michael has created for researchers is one on the history of Wendy’s film work and the company she created called Steel City Pictures: http://steelcitypictures.blogspot.com.au/

As you can see from these examples even our relatively small University of Wollongong Archives holds a rich range of local, regional and nationally significant material. I hope this has given you a useful idea of what potential other archives may also hold for you as artists and researchers.

These notes have been provided by Susan Jones, Archivist, University of Wollongong, Wollongong. Her presentation, ‘Guerrilla Archives’, was presented at the Future Feminist Archive DAAO Workshop at Wollongong Art Gallery on 10 May 2015. This workshop accompanied the Future Feminist Archive residency undertaken by artists Alison Alder and Mini Graff at Wollongong Art Gallery which was supported by Arts NSW.